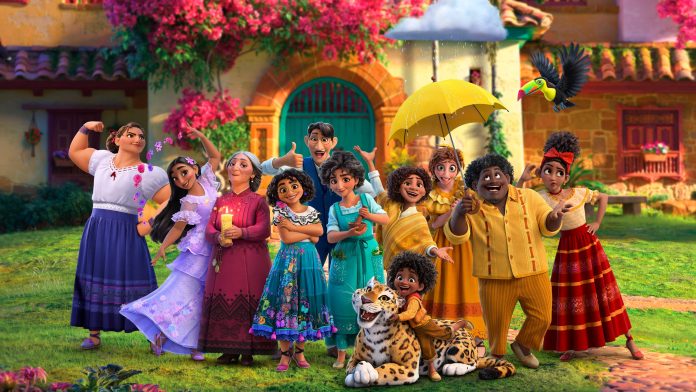 “Encanto” is the new Disney animated film, a colorful family story set in Colombia, in cinemas from November 24th and available on Disney + from December 24th.

The Madrigal family is certainly out of the ordinary: starting with the matriarch Abuela Alma, up to her children and grandchildren, magic marks their life in the village called “Encanto”, a small paradise in the Colombian mountains.

Each member of the family has a particular gift, received at an early age thanks to the power of a special candle, which Abuela Alma received following a dramatic event and which she now cherishes with great attention.

All Madrigals are distinguished in something: between those who can lift enormous weights, those who manage to transform themselves into another person or those who have the power to create flowers and plants or can communicate with animals, each of them lives in the community and thrives. thanks to their talent.

All except Mirabel, Abuela Alma’s granddaughter, the only one who did not receive any gift as a child and therefore stands out from the others for not being “special”. Nonetheless, the girl is very attached to her family and always tries to help others, in her own way, without regretting her too much for being different from her and keeping her smile.

Until a sudden event, which threatens to endanger their home built over many years of magic, plunges the family into the uncertainty of a future and Mirabel will have to find the answers to save her loved ones from a dark destiny.

AN EXTRAORDINARY AND IMPERFECT FAMILY

“Encanto” is the 60th Disney classic, and the second released this year after “Raya and the Last Dragon”, with which she shares a strong-willed female protagonist who must face her own destiny.

Unlike Raya, however, here there is no real antagonist to fight, but a threat that comes from within the same family nucleus, something that questions the choices of the Madrigals and breaks those apparently firm balances on which one the family house is built.

Despite their magical powers, Mirabel’s relatives are imperfect and complex people like everyone else, so the problems they face on a daily basis are the same as any other family. Hence the ease of the public to empathize with them, whether it is jealousies between sisters, pre-established roles from above or the desire to remove a member of the community who does not want to adapt to the expectations of society.

“Encanto” is therefore the story of how the family is the first nucleus in which talents and passions are created, but also how it tries to conform the individual to their expectations and how roles are shaped within which a person must support himself.

A very important message that celebrates individuality and the search for one’s own space within the world, regardless of social origin.

All this with a very colorful animation, which beautifully reconstructs the evocative places of Colombia, among colorful animals and luxuriant vegetation, while the irresistible notes of the composer Germain Franco and the songs written by Lin-Manuel Miranda, which take their cue from South American rhythms and us they give a sparkling and enthralling soundtrack.

A further foray by Disney into Latin American territories, after “The follies of the emperor” and “Coco” by Pixar, testifying to its desire to expand the representation (all the voices of the original cast are in fact interpreters of birth or origin Colombian).

IS IT WORTH SEEING IT?

“Encanto” is certainly a successful and exciting work, even if many conflicts within it could be resolved in a less hasty way and in some situations one gets the impression that the stakes are not as high as it should be.

The defects at the narrative level are partly filled by exceptional graphics, by a successful characterization of the characters (especially the protagonist) and by an atmosphere that plays with folklore, traditions and magic, all seasoned with a push towards important themes. such as family constraints, social expectations and even armed conflicts that force a people to emigrate, barely mentioned but no less impactful.