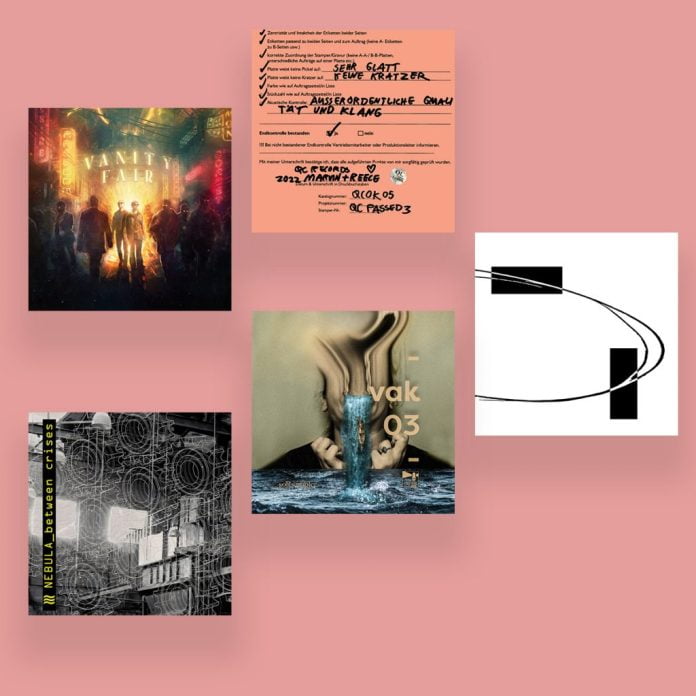 Five new Leipzig releases from the fifth month of the year. Here are our music reviews from May 2022.

This time the start is dark again. Nebula released its first release of the year in early May – a compact four-track compilation. And they move in dark techno, typical for nebula. Namlitt dives very spherically into the depths of the Baltic Sea, Kontinum then spirals back to the surface much more directly and drilling. And Murkey fm spans the arc even further – first with a rather dubby and then with a very rough track. A solid techno retrospective.

My hit: “Worlds Apart”. Why: Because Murkey fm reminds us very straight and deep at the same time how classic and good dub techno will remain.

More keen on house? Then the new QC Records plate should be unpacked. According to the cover, the acoustic check resulted in “extraordinary quality and sound”. It is the first EP in almost two years. Of course, the two operators Carmel and Qnete are once again sending out a sign of life on the home imprint. And they are so casual, playful and summery light that they should be played at an open air in a small garden immediately. Karo contributes an equally laid-back track. The surprise of the EP is then M. Ruffing’s “Fischstufen”: a super great, crystalline sounding and yet highly melodic uptempo breaks track.

My hit: “Fish Ladder”. Why: Because it expands the QC sound in such an unpretentious way and also invites the breaks heads to the party.

At the beginning of May, the vak collective also reported back with a large solo sampler. It is now the third and this time is raising money for aid organizations that support refugees from Ukraine and sea rescue. The collective has bundled a total of 20 tracks for “VAK03” – at first there is techno and house in all its facets, soft and hard, by well-known names and newcomers. In the middle then follows a very exciting part with breaky and experimental tracks. At the end everything dims down a bit – with downbeat, electronica and a spherical vocal piece. So “vak03” offers exactly the wide range that solo compilations need to pick up as many people as possible. And very well curated.

My hit: “Mariä HimmelFart”. Why: Because DJ Badshape always jumps back and forth between different genres in a very refreshing way.

Last week the rework EP for Philipp Rumsch’s 2020 album “µ: of anxiety x discernment” was released, which combined “equally catchy songs as well as improvised or complex through-composed tracks”. Rumsch chose Jana Irmert, Moritz Fasbender, Toechter and Shramm for the new interpretations. The latter is part of Apparat and Bodi Bill and has discreetly pushed “A5” onto the club dance floor. He hovers very softly and elegantly over the vocal and instrument samples of the original. This is where the ensemble’s pop appeal comes through most clearly. The other three acts, on the other hand, move in rather oscillating ambient and chamber music spheres. In this way, very independent tracks were created, which also fascinate detached from their originals.

My hit: “For Iris”. Why: Because Toechter are super reduced and yet somehow orchestral and bulky in a good way.

And finally something completely different: neurofunk and drum & bass with album story qualities. Neonlight also released their second album, Vanity Fair, last week. I’m not completely impartial here, as I interviewed the two for the exclusive deluxe version of the album. But an experienced assessment shouldn’t be expected from me here either – I’m not a D&B head. But only this much: “Vanity Fair” is again a concept album with its own story from a distant world, but in which there are some similarities to our world. Musically, a few more influences have been added. Rock and techno, downbeat and cosmic disco, rave and jazz – plus great Big Room anthems. As always with a great focus on sound design and countless details. In its versatility, however, it is definitely a leap.

My hit: “Tragedian”. Why: Because here with herb and psychedelic rock–Elements a completely different neon light sound comes to light.