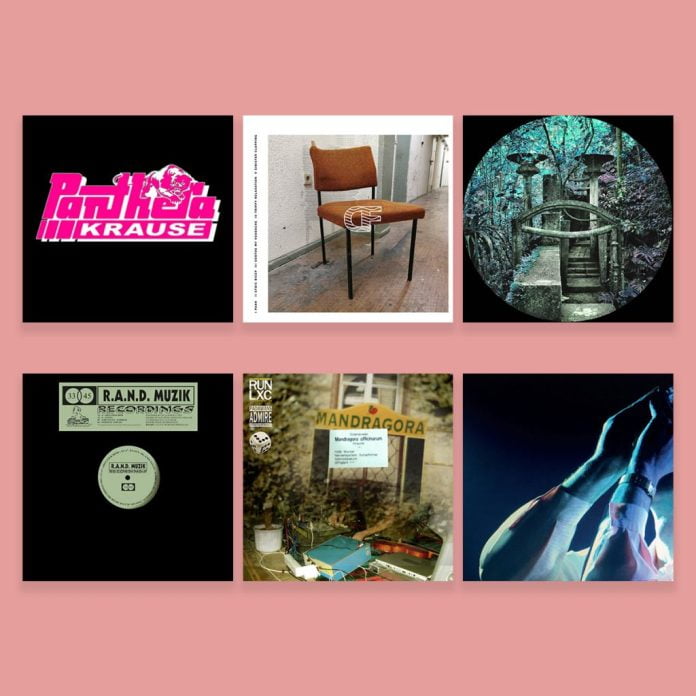 Not quite on time, but hey, here they are: Our record tips from March. With very different sounds and a February latecomer.

Two hits to start with. Panthera Krause is back from the pandemic silence and makes it clear that he can still be expected. I can’t quite keep track of his latest stuff, but it seems to me that there’s a shift towards historical pop gestures and bigger floors. Both “Como Dada” and “All I Want To Do” flirt very confidently and adeptly with early disco tracks. Boring staccato synths, unusual rave moments and incisive vocals. Wow, that sounds like a new drive – and a lot of pent-up anticipation for full floors

My hit: “Como Dada”. Why: Because he combines house pop and disco noir in such a pushing way.

Surprise also with Lydia Eisenblätter. On her own label [OAM] Records has just released a new EP – and it shows their love of techno very impressively. So far, most of her tracks have been house, but “Uncontrol” and “Excile” are much straighter and darker. With frenzied acid loops and powerful bass drums. There are always Spoken Word moments. Very classic, very to the point. And blatantly, Ben Sims pushes “Uncontrol” up a few more power levels with his remix and thus also ignites the Big Room floor.

My hit: “Excile”. Why: Because the high, brightly glistening synth chords in the middle embrace Detroit.

And another month with a new RAND release. It continues with the nods to old heroes of the nineties. This time the London label Alien Recordings comes to a tribute. Andy Panayi and Alec Stone aka A² founded it in the late 90’s and released five EPs – then it went quiet. Apparently, they were among the early tech house drivers at the time, who launched the sound of the noughties that later became so influential. On the RAND compilation, the three central Alien Recordings acts revitalize the sound of this transitional period with four new tracks. This has little to do with today’s lame tech house. The analog synths and edges of the first house years are still audible, but most of them sound calmer, more breaky and more minimalistic. These are investigative tracks that sometimes get lost in trippy sound excursions and circumnavigate the dance floor. “Acidbend” alone turns up the tempo and drills deep into the core with its acid sounds. Nice discovery.

My hit: “Pass Go”. Why: Because the track starts out so deep and then mutates in a multi-layered, tangled manner.

And another moment again: LXC is gradually bringing its archive to the Bandcamp daylight. The third EP in this series was released a few days ago – with a live session from the Distillery from 2001 and three other tracks that he runs under the alias Mandragora. The “Frost” session was specially produced for early morning meditative jungle moments. And as so often with the tracks from the Alphacut spectrum, these quieter and deeper tracks pick me up the most. A 90-minute trip with a certain nostalgia for having missed it live back then. LXC also adds three more Mandragora tracks that have only been heard a handful of times in live sets. Playful, dubby and super percussive experiments, close to bulky avant-garde. But overall surprisingly timeless. Check the liner notes for the release again.

My hit: “Frost Session”. Why: Because it is so reduced and apparently casual and at the same time very concentrated and captivates.

The Rituals concert series last weekend first drew my attention to SupaKC’s label Graveyard Records (shame on me that only now). And through his current remix EP I came to All My Ghosts – another very exciting Leipzig label. There’s a lot going on in the city in terms of the label anyway. There will soon be a lot to report. But first to this collaboration. In early March, All My Ghosts released a five-track split EP by 5AAH and Discount Furniture. The latter moves in a sound field between IDM, Electronica and Gameboy House. So playful sounds, pleasant naive vibes with a lot of lofi old school coloring. 5AAH, on the other hand, is a bit darker and clearer in the sounds. But also a touch more experimental. But in combination, the two go very well together. Interesting Listeneng EP.

Graveyard Records followed two weeks later with two remixes of Discount Furniture’s “Paah” – one by Tim Rosenbaum and one by SupaKC. Rosenbaum shreds the originally lovely, soft, poppy original into a menacing noise piece. SupaKC keeps the warm atmosphere and embeds it in gripping hip-hop influenced beats. So two blatantly different twists, which musically offer a lot together with the original EP.

My hit: “Paah (SupaKC’s Floweee Remix). Why: Because the faltering beats match the warm, but still rough melodies extremely well.

Actually I thought that the new Warm Graves album was supposed to be released in March, but no, it came out in February. So here’s a late-in. In December we had already discussed a pre-single and could listen to the album. Since then it has lost none of its dark-wavy fascination. Deeply shrouded in fog, evoking enchanted and chilled dystopian associations – that’s how the nine tracks on “Ease” sound. Everything in a very pleasantly slowed down tempo, a lot of reverb and with reduced arrangements. Probably not the best soundtrack for the spring that is now brewing – but the album is timeless enough. And the dark seasons are known to come back every year.