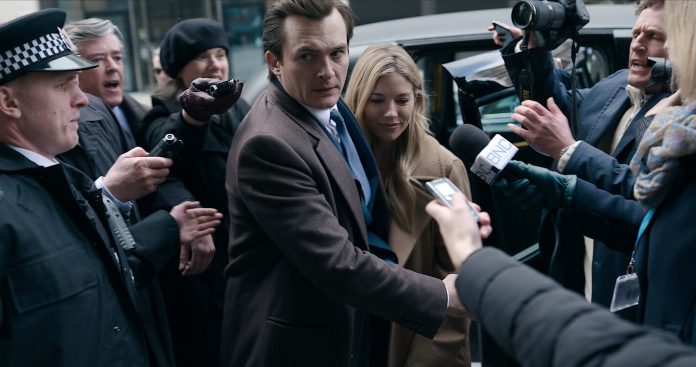 “Sex, power and privilege” like this ew.com defines the new series “Anatomy of a scandal ” Psychological Thriller genre, coming out on Netflix on April 15th and based on the book of the same name by Sarah Vaughan. A miniseries that in just six episodes aims to tell the comfortable life of the English bourgeoisie and how it can be overwhelmed by a scandal penetrating the soul and bones of a woman, sending a clear and round message to the viewer and above all to the spectators.

Plot Anatomy of a scandal

Sophie Whitehouse (Sienna Miller – American Sniper, City of Crime and many others) is the wife of British Prime Minister candidate, James Whitehouse (Rupert Friend – The boy in the striped pajamas, The French Dispatch and many more), father of two children and son of politics and power that govern the corridors of the cabinet. Sophie’s privileged life begins to slowly crumble when Olivia Lytton (Naomi Scott – formerly the face of Disney brands like Lemonade Mouth and Aladdin) accuses the man of rape. Sophie Whitehouse then embarks on a journey from the university years where she and James met, to the present day, where the tenacity of the prosecutor finds its way within the walls of the crown.

Anatomy of a scandal: a camera as a microscope of the human soul

The series, written and produced by David E. Kelley e Melissa James Gibson, analyzes his characters in depth, from the path of Sophie Whitehouse in search of the truth, to her husband Jamesa charming man and powerful politician who comes to terms with an accusation to be denied on the eve of the elections, e Olivia Lytton bright young woman just out of studies with the aim of breaking down the misogynist and prejudicial hierarchy of politics. An analysis that ends with Kate Woodcroft (Michelle Dockery), a very good lawyer struggling with herself.

More than anything else, a technical analysis of the product is necessary as the camera, thanks to the skill of S.J Clarkson, represents his strength, with accompanying movements that allow you to enter both main characters and experience their emotions at the same time.

Thanks to an excellent use of the machine, to a wise use of the scenographic material in perfect balance with the setting of a gray London (creating a photographic result in symbiosis with the soul of the characters), what we are witnessing is the structural study of the English political bubble.

Anatomy of a scandal tells about women by addressing issues such as prejudice in politics, consent, violence and discrimination in the workplace. However, this is not enough to describe such a powerful series. It is reflected in the viewer as the anatomy of the tortuous path to power, of the darkest desires of the human soul and of awareness and courage. Thanks to the directing movements and the choice of making the characters’ past interact with the present, we understand exactly what they are feeling; in that moment we enter a deconstructed and broken organism for what they are experiencing.

Anatomy of a scandal: what is not always said

We are used to always seeing what we would like to see, what we would like to happen in our life. However, many series tell us the truth, in Unbelievable the blaming of the victim is addressed, in Big Little Lies (whose executive producer is the same David E. Kelley) tells about toxic love and emotional dependence, The Handmaid’s Tale screams the need to claim their rights, but Anatomy of a scandal surprises the audience by putting it all together in one script.

The series, which since April 15 will be available on Netflixit deserves a nice 9. Our advice is to look at it carefully trying to understand it in every perspective.