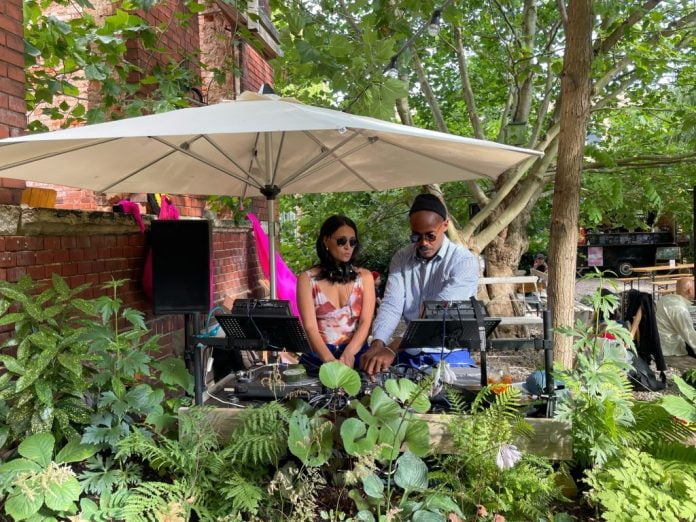 Between the Lindenau bus station, the artificial power plant and the spinning mill is a garden bordering on a red brick ruin. Behind a door that doesn’t give the impression that there is a green oasis behind it, there has been beer, popcorn and music since July. We present the queer beer garden “Don’t let Ricky out” in the west of Leipzig.

Most of you have already noticed: A new summer location in the West has opened. With a dance floor, beer tables, white gravel that crunches wonderfully underfoot, large plants, raised beds and cool drinks. A new hotspot for all those who feel like electronic music, partying, meeting friends and getting to know new people at the weekend, but don’t want to go to dark basements and clubs.

David and Jonas are the ones who transformed the garden in Plagwitz into a beer garden. Under the watchful eyes of a few chickens, hundreds of bees and Ricky, the tomcat and namesake. “This garden is beautiful and big – and we want to let people participate in this place,” says Jonas. “First and foremost, this means that you can be our guest, have a beer and eat popcorn. We want to create a queer place and we are queer ourselves.” It is important to the creators that they are a safe space for FLINTA*, queers and people of color in front of and behind the stage.

Place with electronic music away from the club landscape

Nature, people, music, from Friday to Sunday – that describes the basic idea of ​​the garden in a few words. Unfortunately, most of the beer gardens in Leipzig lack gardens, think Jonas and David. This circumstance initially gave rise to her “crazy idea”, as the saying goes. Within a few weeks, that very idea turned into a drinks trolley, a DJ booth, a garden toilet and a bar team. “It’s obviously not a place where a hardcore techno party is going on. The setting is completely different – but that’s why it offers artists the opportunity to try things out away from the club,” says Jonas.

Enjoy, but don’t let Ricky out

You should keep an eye on the Saturdays in particular, because on these days a local collective will curate the evening musically or organize a performance. Among others, Callshop Radio, Petrola, House of Dietrich and Whatever floats your boat will be there. By the way, suggestions and requests for performances are still accepted!

If you feel like drinking a beer or a lemonade in a real garden in the middle of Plagwitz, you should stop by at Saalfelderstraße 1 on Friday, Saturday or Sunday. From 4 p.m. until open end.

But, please be aware: Don’t let Ricky out! And no matter how beautiful and wonderful the plants and flowers smile at you, no picking plants. The garden can only live if you let it. And now: enjoy it.