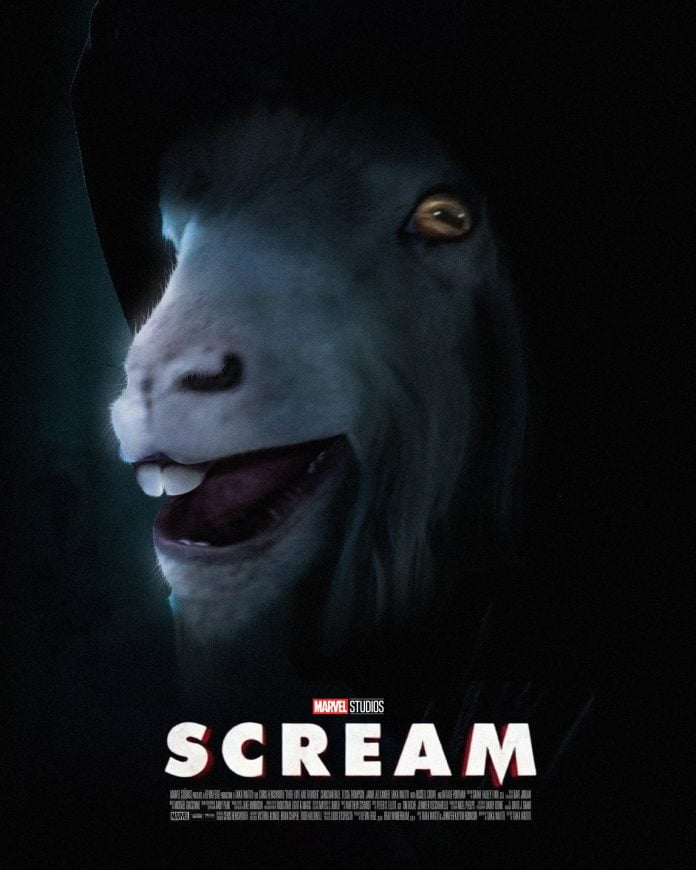 If you have been closely following the marketing campaign of the recently released in theaters, Thor: Love and Thunder of Taika Waititiyou will be aware that in the fourth solo film of the Nordic god, the superhero is doing battle against a new great villain, for which he enlists the help of Jane Foster/Mighty Thor, King Valkyrie, the Guardians of the Galaxy , Korg, and… Thor’s goats –from Norse mythology– making their feature film debut in Love and Thunder. We have been able to see these goats in multiple promos for the film.

The most recent for them is the transformation of one of the goats into one of the most iconic and popular villains of horror movies: Ghostfacefrom the slasher saga, Scream. The crossover comes in the form of a fun poster created by BossLogicin which he uses the classic poster of Screamwith a dark background, the title below (with the Marvel Studios logo), and a central figure, which far from being Ghostface, is the face of one of the goats from Love and Thunder. The crossover is just the designer having fun with his imagination, since it’s something that wouldn’t happen in reality.

The adorable goats can currently be enjoyed on the big screen, while Ghostface will be seen again in March 2023, when Paramount Pictures opens in theaters Scream 6. The sequel is currently shooting in Montreal, Canada.

In Thor: Love and Thunder:

“The film finds Thor (Chris Hemsworth) on a journey unlike anything he has ever faced: a search for inner peace. But his retreat is interrupted by a galactic assassin known as Gorr the God Butcher (Christian Bale), who seeks the extinction of the gods. To combat the threat, Thor enlists the help of the Valkyrie Queen (Tessa Thompson), Korg (Taika Waititi), and his ex-girlfriend Jane Foster (Natalie Portman), who, to Thor’s surprise, inexplicably wields her magical hammer, Mjölnir, like the Mighty Thor. Together, they embark on a harrowing cosmic adventure to unravel the mystery of the Butcher God’s revenge and stop him before it’s too late.”