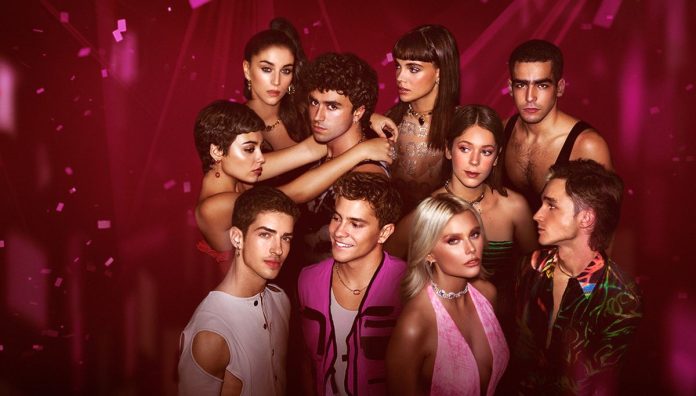 teen drama series Elite is back on Netflix with a fifth season, consisting of 8 episodes, proving to have been one of the most anticipated series of the month of April.

As in every season, even in the fifth chapter of the series there will be great turmoil among the boys of Las Encinas.

After Armando’s murder, a new semester begins in Las Encinas but the boys are constantly put to the test by police investigations, ending up in a network of mysteries and intrigues that will lead them to face difficult situations especially for their romantic relationships, such as between Samuel and Ari. Meanwhile, Rebeka moves away from Mencia to take a pause for reflection, Omar is still shaken by Ander’s farewell and even Prince Philippe, due to his bad past, lives his relationship with Cayetana in a complicated way. To animate the already tortuous events of the protagonists, new characters will take over who will make the balance even more precarious.

The cast of Elite 5: all the news

In the fifth season we find the cast of the fourth with the exception of Miguel Bernardeau (Guzman) and Aron Piper (Ander), two of the iconic protagonists of the series. Itzan Escamilla (Samuel) and Omar Ayuso (Omar) were also expected to drop out Elite at the end of the fourth season but, despite that, they are present in the fifth season. The new entries are the Argentine actress Valentina Zenere (Isadora), known for having participated in the Soy Luna series followed by Andrè Lamoglia (Ivan), a Brazilian actor known for having participated in the Juacas series and Adam Nourou (Bilal), a French actor, known for participating in the film Adù.

The fifth season of the hit series Elite, it begins as in the previous ones, focusing on a new murder around which the story develops, made dark and mysterious by the continuous investigations of the police but on the whole it does not seem to create suspense to the viewer due to poorly addressed issues and a rather poor script. The protagonists are involved in some events without a development that leave many doubts. Omar always appears in the background, Rebeka is analyzed internally resulting in being detached from the story while the children of the principal Benjamin, Ari, Mencia and Patrick, are too tied to their relationships without taking on autonomous roles.

Even the new entries, namely Isadora, Ivan and Bilal, were introduced in the wrong way, almost as if they had already been part of the prestigious high school for some time. Despite this, they are the ones who give positive nuances to the new season as they have created, in parallel with the development of the story, dynamic events for the protagonists, differentiating the story at various points.

Positive was the role of Samuel, the main character of the story on which the writers focused in addition to the principal Benjamin, more analyzed than the previous season and who has assumed a central role in the course of the story. In fact, a parallelism was created between him and Samuel precisely to allow the story to continue to the end, as well as for the relationship between Philippe and Cayetana, intertwined continuously, leading the viewer to ask himself questions about how it will end.

So if the plot itself creates confusion, some characters are involved in significant events, made such also by the performances of the actors who have given the right expression to what happened to them. The season finale instead leaves everyone with bated breath as a great twist leaves open many hypotheses that will be developed in the sixth season, already confirmed by the producers. We just have to wait for a new chapter of Elite and witness new events that will cause a sensation in Las Encinas.