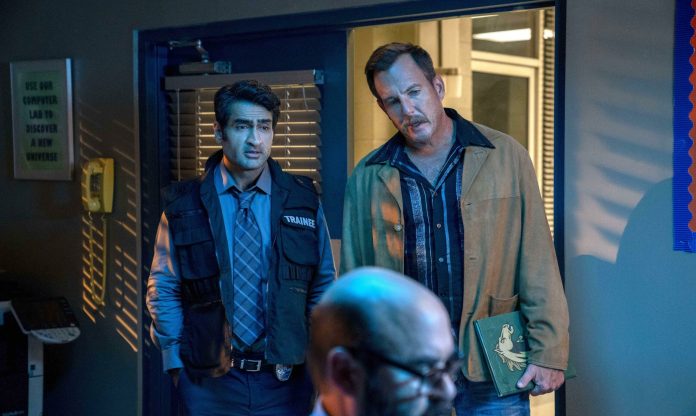 An unsolved case for over 15 years haunts the talented detective Terry Seattle (Will Arnett), while the problems of love are felt and every day is occupied by a new murder case that only he, with his immense skill, can solve.

Seeing it from this point of view we are faced with the classic crime series of Netflix, right? It’s a pity that Murderville, released last week on the streaming platform, is one of a kind. According to the title, what Krister Johnson it seemed to want to communicate it was a thriller or even Horror atmosphere. As any big thriller fan knows though, nothing is ever what it seems in these products.

Murderville: crime as we’ve never seen it before

Murderville brilliantly mixes crime and comedy. How Brooklyn 99 you will say yes, but with a small as well as great and fantastic detail: in each of the six episodes the protagonist (Will Arnett) is flanked by a Guest Star different that, unlike all the other actors, has no script and is therefore forced to improvise. Each of this of these guest star will have to solve the case with Terry Seattletaking notes and gathering evidence so as to get to announce the killer herself at the end of the episode. Reality and fiction are mixed in a series of only six thirty-minute episodes, leading the viewer to almost no longer recognize what is really acted and what is improvised. A thin line that separates the improvisation of the guest star from the acting of Will Arnettwhich many times is broken by the inevitable laughter of the guests, as in the case of Ken Jeong (Mr Chao – The Hangover) who indulges in thunderous laughter, in evident difficulty in the face of Will Arnett’s skill and that others remain firm when the guests take over and begin to lead the game, as in the case of a surprising Sharon Stone that uses charm and depth to his advantage leaving Arnett in “trouble”.

“For Terry, a new day means a new murder case, and a new one

famous guest as a partner “

These words as the opening theme of the series, help to understand how much the synopsis Of Murderville is clear to every spectator right away.

Murderville: the art of improvisation

Speaking very clearly, the plot of the series is not very developed, at least horizontally. In each episode we have a new case and new clues to find regardless of the story behind it. The beauty, however, is that this does not interest us in the least as every spectator becomes a private detective along with Terry Seattle and his shoulder, destroying the famous fourth wallbut this time in front of the TV. In fact, throughout the series, the clues that make us understand who will be the killer of the day are shown to us thanks to well-made shots and the dialogues of the characters (provided that the viewer is careful of course), leading us to a kind of Virtual Cluedo which we soon cannot do without and which, unfortunately, ends after only two hours of viewing. Moments of unsettling irony willfully destroy the few attempts to create a script worthy of CSI, making it nearly impossible to hold back laughter.

Six are the guest stars who take part in the series and among these stands out Conan O’BrienAmerican comedian conductor of the Late Night and producer of many of the funniest episodes of the gods Simpson. It is precisely during his episode that we can understand what the art of improvisation is by always having the joke ready and being really in trouble in front of Will Arnett’s jokes, only in those cases where it is definitely impossible not to laugh.

At the same time we understand how difficult it can be to collaborate with such a good character even if you have a script to follow: when O’Brien immerses himself in a monologue about his life, in fact, he inevitably tears the laughter from the actors around him, demonstrating everything. the career behind him. Among the other guests we find then Kumail Nanjiani e Annie Murphyalso great comic actors who manage to highlight their skills despite in many cases limiting themselves to the “yes, and …”

It is in these last words that my review is hidden. Murderville is an excellent experiment based on “Murder in Succesville”, a British series with elements of improvisation that aired from 2015 to 2017 for three seasons, which brings freshness to the Netflix schedule. The problem is that sometimes the scenes described by the plot do not bring the hoped-for laughs, or at least they no longer bring them after two or three episodes. The repetitiveness of some scenes could end up tiring more than making you laugh, along with some guests who, being guided by Will Arnett, do not give any original touch to the plot. Two slightly sore points that, however, can be evaded primarily because the series entertains you and if you are a fan try to understand who the killer is before the guest star and, secondly, even if some guests do nothing to change the cards on the table, however, it is hilarious to see them constantly taken by surprise and barely keep the laughter in front of a victim who can not help laughing.

Overall Murderville is in my opinion a great 8.5 / 9it is not a masterpiece it is true but his duty does it and also very well.