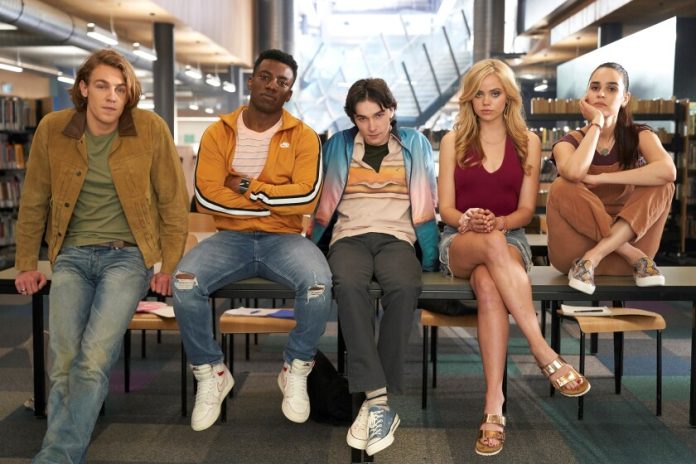 Simon says: One victim, four suspects but tons of potential murder motives. This is the concept of “One of us is lying” (One of us is liyng – original), the latest young adult series recently released by Netflix. From the words used above, it might seem like the usual teen series, a doubt that I also had to be honest. Fortunately, “One of us is lying”, thanks to a fitting pace, well-defined shots and a script that is not too rolling in the trash (with influences from important teen dramas like Gossip Girl or Pretty Little Liars and with a hint of “The Breakfast Club” ) is not completely taken for granted. Or at least he tries.

Before going into a real review let’s try to understand what this new series is about.

Plot One of us is lying

Simon Keller (Mark McKenna) is the classic nerd, tired of the injustices he has to suffer every day from his school friends, so much so that he decides to become a sort of Gossip Girl, with a little less style, but in the light of the sun, publishing every week a scabrous secret through “About That”, so as to undermine the social status of every high school student. Everyone has a reason for wanting to kill him, but that day there are only four students in detention with Simon. It is precisely when the latter falls to the ground, that the victims become others: Addy, Nate, Cooper and Bronwyn. Were they the ones who killed him? Has anyone set them up? Who is it that now publishes anonymously on “About that” to tarnish the “Crime Club”? What is certain is that someone is lying.

Based onbook of the same name by Karen M. McManus, released in 2017 and remained on the New York Times bestseller list for 166 weeks, “One of Us is Lying” feels a lot of the influences of the great teen series already mentioned above, with a hint of The Breakfast Club but also Veronica Mars.

Classic stereotypes of young adult series are present in abundance, from Nate Macauley (Cooper Van Grootel) the beautiful and damned underneath sweet and caring, a Addy  Prentiss (Annalisa Cochrane) the classic cheerleader with the typical weaknesses of a thirty-year-old woman, who plays the treacherous to conform to the group, to Bronwyn Rojas (Marianly Tejada) the nerd without ever an absence, to end up in Cooper Glay (Chibuikem Uche) the super athlete with an unspeakable secret. Not to mention the usual clichés to which Netflix has now accustomed us to the point of getting bored.

“One of us is lying” relies on a narrative from a new point of view, to be able to differentiate itself from other competing products, telling the story from the perspective of the alleged killers and then throwing them into a vicious circle that will lead them to tell a lie after another, making them feel the real victims of the circumstance. The fact is that the series does not fully manage to differentiate itself, to tell that story that makes it stand out from any other series for young adults, even if, unlike many other series, it does the only thing it really has to do: instill the curiosity. It is in fact a perfect series for a binge watching session, which in just eight episodes manages to make the viewer stay on a tightrope, to the point of insinuating the doubt that the same has killed Simon Keller. Each episode leaves us speechless and with the desire to immediately start the next one to find out who is behind the new blogger of “About That”, making us go back to those sleepless nights when we tried to figure out who was -A, the persecutor of the sweet Pretty Little Liars. Fortunately on this round we don’t have to wait six seasons of 24 episodes to find out, but still we are left with a bad taste just when we thought everything had gone well.

A series produced by Peacock, which once landed on the streaming platform immediately aroused interest in the viewer by differentiating itself from the other products of the same, concluding the journey with the landing on Netflix and with the consequent deserved success.

Fortunately, in January Peacock ordered a second season of the series, which will be shot in New Zealand as well as the first, and from the title of the original book “One of is next” – “One of us is next” we can only expect as much suspense .

So, if you want a vision that can make you spend a few hours playing detectives, don’t miss “One of us is lying”… But be careful because someone might be watching you.