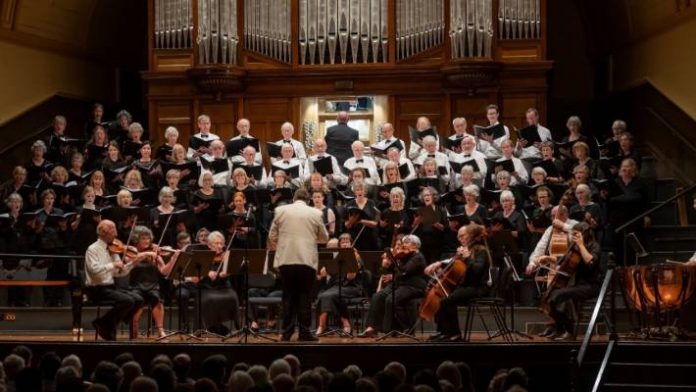 The choir and orchestra, with vocal soloists and instrumentalists, will perform under the baton of Nigel E. Weeks.

Part l of the programme features John Rutter’s Requiem, a monumental work, written in 1985, which is considered his most beautiful and exquisite composition. The Requiem, frequently played since its composition, stands as a clear sign of humanity’s quest for solace and light amidst the darkness and troubles of our age.

It employs a non-traditional approach, including movements based on scriptural texts – Psalm 130 (Out of the Deep), which begins with an unaccompanied cello solo in C minor, and Psalm 23 (The Lord Is My Shepherd), notable for its plaintive oboe solo, together with excerpts from the 1662 Book of Common Prayer. The seven sections of the work form an arch-like meditation on the themes of life and death, ultimately moving towards serenity and light – the lux aeterna of the closing text.

Whilst he uses conventional harmonies, Rutter is not averse to throwing in a stinging dissonance for dramatic effect. Chant-like unisons suddenly burst into 8-part chords, and chromatics are used to intensify rather than change keys.

Rutter’s Requiem is unmistakably optimistic in its message of hope and comfort, expressed through the beauty of the chosen texts and Rutter’s uplifting music.

Friend, DJ, perpetrator – happy – we like electronic music from leipzig